A network for new and aspiring library professionals

Three Centuries of the Written Word

I would like to thank the NLPN for organising the Chetham’s Library tour which took place on Saturday in Manchester. There was a great turnout, the weather was lovely and the library was beautiful. I think I can speak for everyone when I say it was a fantastic afternoon and the organisers and the tour guide, Kathy did a great job.

I have walked past Chetham’s Library so many times but have never taken the time to go in. I am disappointed with myself because it is a treasure that isn’t even that well-hidden. It is right in the centre of Manchester, just a two minute walk from Manchester Victoria Station and across from the National Football Museum. I can’t believe I visited the National Football Museum before I ever thought to visit Chetham’s Library; libraries are way better than Football.

The building in which the library is housed is very pretty. As soon as you step through the front gates, everything is peaceful and quiet. You’d be forgiven for thinking you were worlds away from the metropolitan city of Manchester. But in reality you are on the grounds of a very old medieval site that predates the city of Manchester itself. The city of Manchester expanded outwards around this central location. Today we think of Manchester as one of the world’s first great industrial cities and it is very hard to imagine it as the small market town it once was.

Chetham’s Library is the oldest surviving public library in Britain and was founded in 1653 and at the time, was the first purpose built independent study space in the north of England (Chetham’s Library, 2008 Chetham’s Library: Three Centuries of the Written Word [leaflet]). The library is housed in one of only a few remaining medieval buildings in Manchester. The building was purchased and renovated after the Civil War by a prosperous gentleman called Sir Humphrey Chetham who eventually and generously left funds in his will to establish the library and Chetham’s Hospital School. Here are two paintings which can be found in the library’s reading room; one of Sir Humphrey Chetham and another of the first librarian. 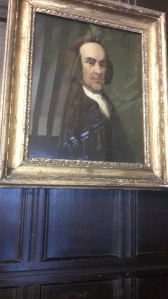 It was interesting to learn that all of the books in the library used to be chained to the shelves or presses to stop people popping a book into their robes and leaving with it. There were stools provided for the readers with ‘S’ shapes carved into the top. This ‘S’ shape was actually a handle so readers could move the stools to the shelves and the chained book which they wanted to read. Later on the chains were removed and the books were then kept behind wooden gates and readers would then be locked in with the books. Eventually the books were brought to readers in the reading room, a practice which still happens today in many special libraries and archives. 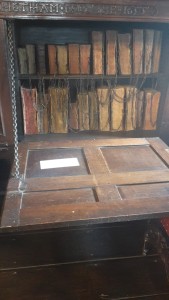 Cabinet inside the reading room

Kathy brought out a selection of books for us to look at and they were all lovely. My favourite was one of the books from the collection of diaries. There is nothing more interesting that reading historic diaries as you can gain a whole new understanding of events. The diary belonged to one of the thousands of POWs who were marched across Europe during WWII, many of whom died from the bitter cold and terrible conditions. There was a drawing of a map of his journey in the middle pages of the diary and it really blew me away.

I must of course mention Marx and Engels. The revolutionary socialist Karl Marx and the philosopher Friedrich Engels spent many long hours in the summer of 1845 pondering the state of society from the desk in the alcove, which still remains to this day.

Marx and Engels sat here (minus the biscuits)

It is hard to believe when looking out of the window that one of the world’s worst slums was situated just outside. Engels’ observations of Manchester and the slums culminated in the 1845 study The Conditions of the Working Class. Engels argued that the industrial revolution did nothing to benefit the industrial working classes in Britain and the living conditions in the slums which he observed through the window probably solidified this opinion.

I purchased a poster that now lives on my wall in my study room/ library. Everyone should have a bit of Chetham’s inspiration for their own libraries. 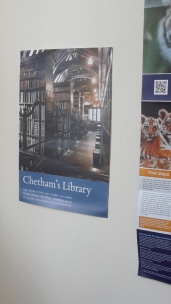 Thanks NLPN for organising the tour. When’s the next one?

If you enjoyed Amy’s pictures take a look at these photos taken by another of our attendees (Scott).

2 comments on “Three Centuries of the Written Word”